Great, you want to travel to Buenos Aires but the question is “where to stay in Buenos Aires”. Let’s say that the city is big! Of course, it’s how you compare it. The metropolitan city is 203km² or 78.37 square miles big with 2,8 million inhabitants. When it comes to comparing the size, it is two times the city center of Paris. The capital city of Argentina is pretty dense.

Where to stay in Buenos Aires (the map).

I’m being straightforward. Below we show you a “where to stay map” with all the neighborhoods. We worked with icons to make it easy. Some neighborhoods don’t have icons because it’s just not that tourist area. The map is just an indication and can help you during your search.

For your stay, I focused on attractive neighborhoods that give you a lovely feeling during your stay in Buenos Aires. Are you wondering if the city is safe for tourists? Check our article about that topic: how safe is Buenos Aires? 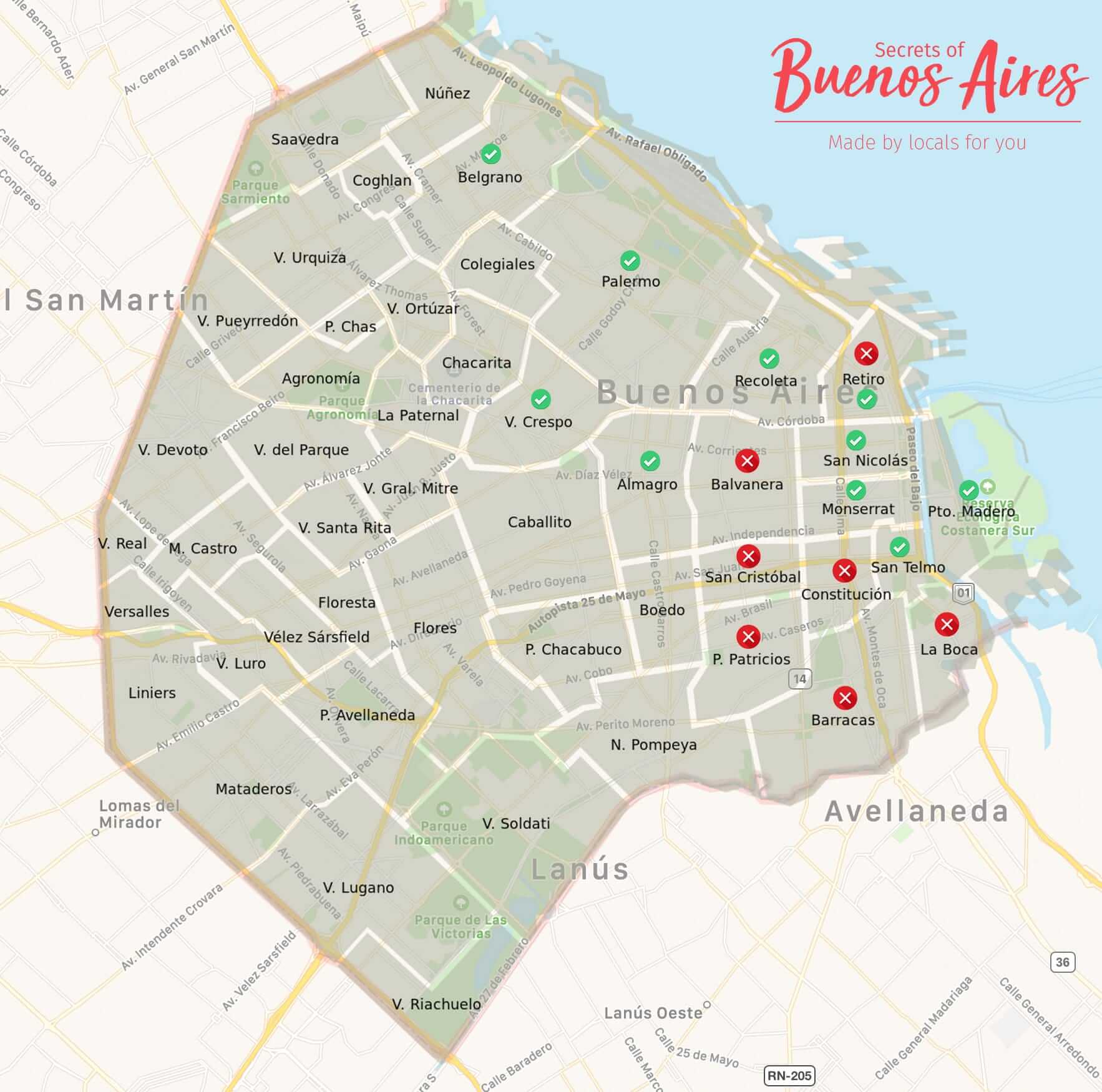 The city is big. For example, traveling from Palermo to the city center – let’s take the presidential palace – will take you around 25 minutes with the subway. During your stay, I recommend staying in areas that are attractive to you. Staying in suburban neighborhoods or just too far from everything isn’t that pleasant.

Retiro
Retiro is a nice area but it depends where in Retiro. Some hotel companies such as Sheraton are located in front of Retiro train station, an area where you need to take just that little bit extra precaution. Once you move further away, it is ok.

San Telmo
The oldest and smallest neighborhood to stay in Buenos Aires is San Telmo. Certainly, after sunset, it is getting quite calm there. Walking in a group is just fine. It’s our personal favorite because it reflects the old character of the city and is quite calm during the night. Also, San Telmo is seen as the upcoming trendy neighborhood of Buenos Aires. One plus point more, in 10 minutes you are in front of the presidential palace or Puerto Madero.

Palermo Soho is chic. Small and gives you the real local identity of Buenos Aires. During your stay in Palermo Soho, you will discover local restaurants and the nightlife of the city. Most of the hostels are also located here. A lot of start-up bars and restaurants are located here. It’s the perfect point to start every trip. Very well located if you want to take the subway.

Palermo Hollywood is characterized by its high apartment buildings. The busiest area to stay in Buenos Aires. Always something to do during the day and at night. Many hotels are located here. Good connection with public transport and always a taxi nearby.

Palermo Viejo or also called Palermo Chico is the oldest part of the Palermo district. Close to the Malba museum. A quiet neighborhood in a big city. On the other hand, there are not many hotels here.

Recoleta
Central and calm location to stay in the capital of Argentina. Famous for the cemetery but also for its statues buildings.

Belgrano
This neighborhood will give you a more suburban feeling. High apartment buildings and a good connection with public transport. Further, Chinatown is there and the neighborhood to find the statue of liberty!