Did you hear about the steakhouse in Buenos Aires? Argentina is ranked 2nd on the beef consumption world chart. With around 55kg or 120 pounds per person each year. On the other hand, the average beef consumption is 7,7kg or 17 pounds! Without a doubt, for all meat lovers, the capital city of Argentina is the place to be for a grill or steakhouse.

Here I give you my personal top 10. After many years I found the best steakhouses / grill in Buenos Aires. Some are very touristic and some are real secret places where you can enjoy the real original parrilla of Argentina.

Read also: 20 best things to do in Buenos Aires. My favorites.

The steakhouse or parrilla grill in Buenos Aires

Parrilla is the metal grill where the meat is slowly cooked on carbon. Also, parrilla is the name for restaurants that cook meat on the grill. Argentines take their time when it comes to cooking the meat. Up to two hours is common. The result is a tender piece of Argentinian steak and that’s what you will find in a steakhouse in Buenos Aires.

First, be aware if you ask for a parrilla for two. It will have a range of meats including organs such as kidneys, and intestines, … Are you in to try it? Go ahead. Otherwise, ask if you don’t want it. Of course, you can select your piece of meat separately on the menu card. The most famous steak is “Bife de Chorizo”. The grill in Buenos Aires is always on!

Second: Argentines like their meat cooked well done. Ask if you want it differently.

The best steakhouse in Buenos Aires

I based our list on experiences of my own and the top list of the gastronomical contest “best steakhouse” held by the city of Buenos Aires.

Read also: Calle Florida: everything you need to know

Let’s start with Fogón Asado in Palermo. What a great night out! If you want to get into the Argentine cuisine then Fogón is the restaurant for you. During the night you will sit with maximum 25 other guest around and nearby the Argentina grill (parrilla). You can see the chef at work and the way in which the asado is made. An experience that you don’t have in any other grill restaurant.

The food was delicious. An 8-course menu with appropriate wines. It makes it that little bit more special. Starting with a cocktail and later the first course is served. A local made empanada. Afterward, the course are following up smoothly. With the highlight of the Argentine beef. So delicious! Especially when you know how they made it.

Chimichurri is typical for an Argentinian asado. If you feel like it, you can make the chimichurri yourself together with the chef.

Fogón is a unique experience. Definitely worth going out for dinner. Book in time because places are limited. 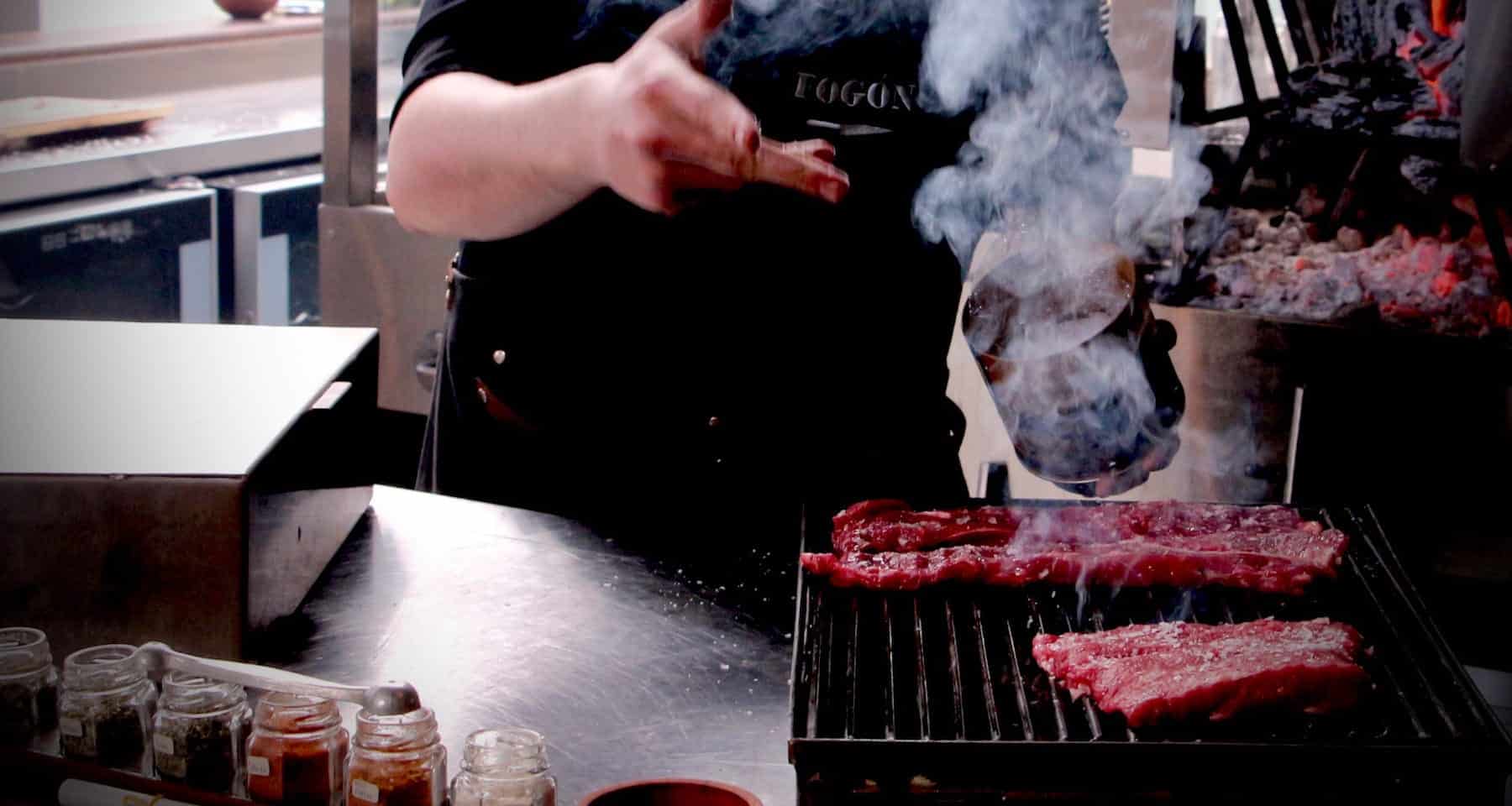 My number two on the list “best steakhouse in Buenos Aires” is El Ferroviario. More local you can’t get while eating in a “comedor”. The meat is of perfect quality and in big portions. The meat came so smoothly off the bone! The waiters will advise you well. Reservations are not possible, so you need to go on time. Waiting times at El Ferroviario can run up to 2 hours because it’s so famous and delicious! The grill in Buenos Aires if you want the real experience.

Get into a traditional atmosphere at Don Julio. My number three on the list. Don Julio is a traditional grill in Buenos Aires with an extensive wine list. In 2020 Don Julio received first place in the list of “The Worlds 50 Best” as the best restaurant in Latin-America. Located in the heart of Palermo. You can make a reservation online.

A grill in Buenos Aires located in the city’s oldest neighborhood San Telmo, that’s El Desnivel. A cafeteria feeling, very local atmosphere. The “Bife de Chorizo” is a recommendation but also the typical costillar or tirra de asado. Also the true locals’ cuisine back to the roots of a parrilla in Buenos Aires at El Desnivel.

Looking for a small, non-touristic, and cozy meat restaurant? Hidden next to Parque Lezama you find Parrilla 1880. A typical Buenos Aires menu card with good parrilla suggestions. A little secret on the edge of San Telmo.

Head to Puerto Madero for my number six on “best steakhouse in Buenos Aires”, Estilo Campo. A good address for the fine cuisine parrilla. The fireplace will seduce you to go inside and eat meat fresh from the grill. It is possible to make a reservation online at Estilo Campo.

A little bit further located from the heart of Buenos Aires you will find parrilla El Boliche de Nico. A colorful place with an extensive menu. Enjoy your Argentinian beef with a perfect wine. Online reservations are not possible.

A parrilla in Buenos Aires that has more the offer than only meat. We suggest you take the steak from the grill on the menu. A big piece, well cooked and a siding. Located near the big avenue “9 de Julio”. Worth a place in our list of best grill in Buenos Aires.

A picturesque steakhouse located in the middle of Chinatown. The founder of the restaurant is from Uruguay. He brought some grill specialties from Uruguay to Buenos Aires. And by coincidence: Uruguay is number one in meat consumption per capita.

Meaning “The butcher” translated to English. A gourmet style steakhouse in Buenos Aires. Located in Palermo near Plaza Italia. The restaurant is not scared to experiment with the meat on the grill. Spices are well used here. La Carinicería is our final parrilla in Buenos Aires on the list.

La Brigada is a steakhouse in the heart of San Telmo, Buenos Aires. The interior is a classic Porteño style with football shirts as decoration. At La Brigada, you will have a wide choice of meat and sides. Accompanied by an extensive wine list. The waiters do know how to serve tourists and without any problem, they will give some suggestions.

Every Argentino/a has a personal favorite steakhouse in Buenos Aires. Get in touch with a resident and ask what’s their favorite grill. With a lot of passion, they will explain why that steakhouse is the best in Buenos Aires. Possible it is a steakhouse not in the list, but a grill around the corner. A bottle of Malbec wine and the delicious meat, and you will are in 1, 2, 3 a true Argentino.